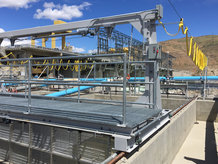 In April of 2016, Valley Electric (Everett, Washington) purchased several Conductix-Wampfler Stretch Wire Festoon systems and a Safe-Lec 2 Conductor Bar system for Wells Hydroelectric Dam and Fish Hatchery. The electrification equipment powers various motorized fences/gates that guide fish away from the turbines and into the hatchery. Fish that enter are separated into spawning areas by species.

Wells Dam, built in 1967 and located on the Columbia River near Chilan, Washington, is run by the Douglas County Public Utilities District. The dam has 10 turbines capable of generating a peak of 840 megawatts of electricity and spillways capable of passing 8.8 million gallons of water per second.

During the 1980s, Douglas County PUD developed a system to guide young salmon and steelhead away from moving turbines and safely through Wells Dam. The unique hydro-combine design at Wells allows juvenile fish to bypass the turbines by utilizing the existing spillway at the project. No expensive screens were required. The migration success rate for these juvenile salmon and steelhead exceeds the level sought by fishery agencies and is the highest on the Columbia River. Of the remaining small number of fish that pass through the turbines, a high percentage travel safely through large turbine water passages.

The Wells Fish Hatchery, located near the dam, is dedicated to enhanced production of steelhead and summer Chinook for harvest opportunities. White sturgeon are also produced for restoration programs, while trout, kokanee, and land locked Chinook provide recreational fishing opportunities in regional waters. The Wells Project was built with fish ladders on both ends of the dam. Adult salmon and steelhead migrating upstream locate the ladders as they travel along the shoreline. One of the ladders is equipped with a trapping mechanism to aid biologists in their study and enhanced propagation of the fish. Motorized fences and gates push fish into eight sorting tanks so they can be separated by size, species, and gender.

In 2012 the Douglas PUD steelhead program was adjusted provide more accurate estimates of the number of juvenile fish passing through the Project. As a result, 8,000 steelheads are produced to achieve “no net impact” (NNI). Currently, annual production at the Wells Fish Hatchery includes 408,000 yearling ESA (Endangered Species Act) listed summer steelhead, 804,000 yearling and sub-yearling summer Chinook, 5,000 juvenile white sturgeon, and 20,000 pounds of trout, kokanee and land locked Chinook. The programs include steelhead conservation programs for Omak Creek and the Twisp River, and two safety-net steelhead programs that take place in the Methow and Okanogan rivers to provide additional steelhead returning adults for harvest or conservation purposes. A fifth safety-net steelhead program is operated in the Columbia River downstream of Wells Dam. This program provides fish for harvest and conservation purposes.

Adult summer Chinook are collected for broodstock in July, August and September. During these months adult Chinook can be seen in the hatchery holding ponds. Juvenile summer Chinook are released from the hatchery in April and May. Adult steelheads are collected for broodstock in the fall and spring, and yearlings are released in the Twisp, Methow, Okanogan, and Columbia rivers as well as into Omak Creek in April and May. Juvenile sturgeon are released into the Wells Reservoir in late spring.

Boat launching, recreational facilities and a municipal park can all be found in Pateros, Brewster and Bridgeport, towns located upstream from the Wells Project. The improvements at these parks were made possible with Wells Project funding.

Conductix-Wampfler is honored to be part of this program to preserve and protect endanger fish species and to enhance our fish production and population.

Back to news overview

vCard
QR-Code
How to find us